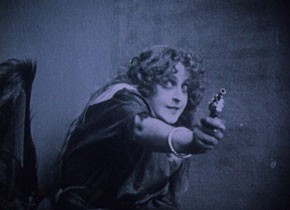 Gustav Deutsch, born in Vienna in 1952, is a leading figure of international found-footage cinema. In his extravagant "remixes" of film history, every genre imaginable has its place: fiction and document, magic fables and newsreels, amateur and scientific films. Although his works are highly playful and often humorous, he is not concerned with ironic effects when choosing and editing his found materials. Essentially, Deutsch’s filmmaking looks for a “sensual comprehension” of the medium, and for an understanding of the ways in which cinema, history and individual lives are intertwined. The title of one of his major works sums up this perspective: Welt Spiegel Kino (World Mirror Cinema).

In Deutsch’s case, however, the multiply fragmented "mirror" that stands between "world" and "cinema" becomes a veritable hall of mirrors. The Retrospective devoted to his oeuvre is meant to lead audiences to precisely this place. It opens with the première of Gustav Deutsch’s most recent endeavour, Film ist. a girl & a gun, which mixes images of warfare, pornography and the cinema of romance. Some of the original materials used in the making of this film will be presented afterwards, as the visual element in a live “film concert” performed by regular Deutsch collaborators Christian Fennesz, Martin Siewert and Burkhard Stangl.

Deutsch began working with moving images around 1980, when he became associated with the Vienna Media Workshop Medienwerkstatt. During the 80s, he gradually moved from documentary video works into conceptual filmmaking and found his central theme and methods with Adria (1990), a quirky and mock-scientific collage of 1950s and 60s home movies. With few exceptions (such as the magnificent “experiment in ethnography”, Augenzeugen der Fremde, 1993), he has explored the mode of found-footage film ever since. Together with Hanna Schimek, his partner in work and life, he combs film archives throughout the world for neglected or forgotten material and creates intricate and poetic “re-readings” of these archival treasures. What began in 1995/96 with several 1-minute masterpieces such as Film Speaks Many Languages soon grew into a monumental work in progress: In his ongoing series Film Is. Deutsch investigates the endless wealth, unfoldings, and functional mechanisms of the medium. Cinema’s two “birthplaces”, the scientific laboratory and the fairground, are of special interest to him.

The ‘juggler of found footage’ is only one of several artistic roles which Gustav Deutsch has taken on during the past three decades. He is an architect by training and a visual artist (his recent installation is currently on show at the Vienna Kunsthalle, in the exhibition Western Motel); his palette comprises photographic works and multimedia projects, lecture series and performances. Most of these facets will also be on view in the Film Museum programme; there will be a lecture by him and Hanna Schimek on the elements of literature in his new work, and a rare opportunity to witness Deutsch’s "interactive performance" Taschenkino (1995). Nevertheless, film remains at the core of his creative output. Deutsch asks: What does cinema tell us when it is removed from all its functional contexts? What secret messages are stored in film fragments? What if we see them more as traces of time, social use and ideology rather than as contained fictions? By tirelessly to reanimate and recontextualize the cinematic heritage, Gustav Deutsch works towards nothing less than the future of film.