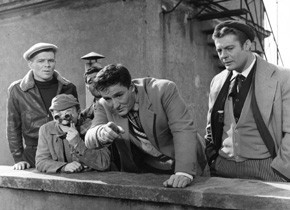 Dino Risi and the Commedia all'italiana

January 8 to February 8, 2010
From the late nineteen-fifties to the mid-seventies, the Commedia all’italiana (Comedy Italian Style) was synonymous with piercing social commentary in the shape of virtuoso entertainment – a stronger popular cinema was hardly imaginable anywhere. The movement was not only a hit with audiences but also garnered numerous awards for directing, writing and acting at the major film festivals – and at the Oscars. The father of this deeply realistic and bittersweet style of comedy was Mario Monicelli; the former neorealist Pietro Germi became its best-known practitioner when he achieved worldwide successwith films like Divorce, Italian Style; but the true master of the genre was Dino Risi, a modern-day genius of sardonic laughter. Risi’s early careers as a psychiatrist and documentary filmmaker mark his later work: like no one else, he was able to reveal the vanity of the Italians to themselves with a distorted yet illuminating mirror.
Starting on January 8, the Austrian Film Museum presents an in-depth look at the Commedia all’italiana. Comprising 34 works (including thirteen by Dino Risi), the series is a continuation and elaboration of last year’s major retrospective on the Italian cinema of the 1960s. The richness of this period results from a productive coexistence of art cinema, the arte povera of certain genre masters and the blossoming of a new generation of comedy actors, directors and screenwriters. The latter, especially the writing team of Age & Scarpelli, learned their craft in satirical magazines, variety shows, and in working with “folk comedians” like Totò. But they also transformed the lessons of neo-realism: “In the fifties, it was forbidden to poke fun at social problems. But we did it anyway. We loved creating a cinema that dealt directly with the people we knew and those we met, in factories, train stations and on buses.” (Mario Monicelli)
The seminal work of the Commedia all’italiana is Monicelli’s terrific caper comedy I soliti ignoti (Big Deal on Madonna Street) from 1958. It was the Year Zero of the Italian economic miracle, which five years later was honored with its own film: Il boom, Vittorio De Sica’s darkly comic ballad about the era’s social climbers and nouveau riche. As Dino Risi has stated, “the Boom changed our perspective. Neo-realism had become a mannerism. It was no longer enough to simply film reality, one had to explain it.” And explaining meant: stripping away illusions, demystifying social myths and exposing deeply-ingrained ideologies – i.e., the cult of the family and the church; the entanglement of politics, economics and crime (Alberto Lattuada’s Mafioso); Italy’s self-deception about the wars (in Monicelli’s pioneering La grande guerra or Luigi Comencini’s Tutti a casa); the Sicilian patriarchy (Germi’s Divorzio all’italiana and Sedotta e abbandonata); the regular downplaying of the fascist past (strongly countered in Risi’s La marcia su Roma or Luciano Salce’s Il federale) – and above all the widespread hypocrisy and conformity of the Italian bourgeoisie, as in Risi’s merciless Una vita difficile.
As the boom ended, so too did the halcyon era of the Commedia all’italiana. After 1964 the form began to mutate and produced several intriguing variations and tonalities: bitter and melancholic (Ettore Scola’s masterpiece, C’eravamo tanto amati, 1974), darkly existential (Lo scopone scientifico, Luigi Comencini, 1972), sometimes approaching pure social horror (Monicelli’s Un Borghese piccolo piccolo, 1977) or escaping into dreamy nostalgia (Franco Brusati’s Pane e cioccolata, 1974). Across the ocean, several of the ‘New Hollywood’ filmmakers such as Robert Altman or Bob Rafelson also echoed and expanded on the “Comedy Italian Style.” In different ways, these later films are all descended from the bestiary fashioned by Dino Risi in 1963 with I Mostri (The Monsters) – followed by Antonio Pietrangeli’s similarly kaleidoscopic, if much more tragic lo la conoscevo bene (1965). These films bring the essence of the Commedia all’italiana into view: “A small theater of infamy, a gallery of nuanced archetypes: the useless egotist, the cowardly bourgeois, the lazy opportunist, the hypocritical Catholic, the womanizer who refuses to grow up.” (Gerhard Midding)
The cinema of the Commedia all’italiana can only be partially explained through the contribution of its auteur directors. No less important were the screenwriters – and the great actors: Vittorio Gassman, Alberto Sordi, Nino Manfredi, Ugo Tognazzi, Marcello Mastroianni. Their performances not only gave expression to specific social masks and regional peculiarities, they also exposed multiple layers of deception and intrigue. Sordi was the one who most fully embodied the Commedia – he inspired all of the directors in the genre. Gassman, the eternal furbo, was the indisputable center and motor of Risi’s masterpieces, from Il sorpasso (1962) to Profumo di donna (1974). Tognazzi’s anarchic and antisocial energy stamped the films of Luciano Salce and also connects the work of Marco Ferreri to the Commedia all’italiana. Mastroianni, in turn, lent every film in which he appeared a certain forlorn quality, a pastel melancholy that belongs as much to the Commedia as Mario Monicelli’s muffled sounds of hope or the opaque anger that rages through the films of Dino Risi.
The retrospective includes lectures by Adriano Aprà, Gerhard Midding, Olaf Möller and Giovanni Spagnoletti. It is presented in collaboration with the Cineteca Nazionale and Cinecittà Luce, with the support of the Italian Cultural Institute in Vienna.
Related materials
Photos 2010 - Vorträge zu "Commedia all'italiana"
Share on