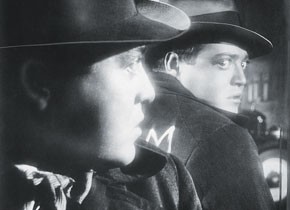 In German film history, the cinema of the Weimar Republic represents the golden age: classics such as The Last Laugh by F.W. Murnau, Metropolis and M by Fritz Lang and the great silent films by G.W. Pabst are considered key works of the medium. But they are merely the tip of the iceberg of an enormously fertile cinema, made possible by the boom of the German film industry following World War I. Inflation allowed for cheap production – and thus allowed creative space for experimentation.

Artistic innovation went hand in hand with a fascination for the radical changes occurring in this era: an experience of modernity which brought forth social, economic and spiritual fears of loss, as well as the promise of rapid advances and new freedoms. The modern city – with its class differences exacerbated by cramped spaces, emerging mass culture and an overwhelming abundance of everyday impressions – becomes the main cinematic motif of this existential transformation: "Swarming, see how it swarms. How all this moves," is how Alfred Döblin described the sensory overload of his main character, Franz Biberkopf, in the city novel Berlin Alexanderplatz, which was impressively adapted for the cinema by Phil Jutzi.

Karl Grune's formative work, The Street (1923), about a humble man seduced by the lights of the big city into a world of crime and decadence, establishes the pattern of a new genre: the "street film", exploring urban space under the influence of New Objectivity. At the same time, and somewhat ironically, the Weimar film industry invented an artificial city – at Berlin-Babelsberg – where the depiction of city life could be modified in new ways thanks to technological developments. The unchained camera work in The Last Laugh, for instance, would produce astonishment and disbelief, even in Hollywood. Grune's enormous city panoramas were all constructed in the studio (Siegfried Kracauer called them a "series of futuristic landscapes"), and Metropolis, inspired by Fritz Lang's visit to New York, finally established the science-fiction aspects of this new cinematic city.

Thanks to the extremely high quality of its productions, Babelsberg was known as "Europe's Hollywood" as early as 1925. And beyond Lang, Murnau and Pabst, several other directors such as Ludwig Berger, E.A. Dupont, Robert Siodmak, Werner Hochbaum, outstanding screenwriters (Carl Mayer), production designers (Erich Kettelhut, Otto Hunte) and cameramen (Eugen Schüfftan, Karl Freund) climbed to the top rung of international filmmaking until the early 1930s.

These creators of the virtual ciné-city had an important counterpart in the real metropolis of the Weimar Republic: as described in detail by Siegfried Kracauer, the "cult of distraction" brought a new mass audience of clerks and "shop girls" to movie theaters which, in turn, would transform the cityscape. The large neon signs of the new movie palaces are emblematic of the temptations of urban consumer culture, and sometimes they even advertise films which deal with this very subject, as in the case of Joe May's greatest film, Asphalt. Together with M, this highlight of the street film genre provides a Weimar model for the nocturnal turmoil later to be staged in American film noir. The fatalistic view of man as a captive of the urban system and its psycho-geography continues to resonate even in a famous documentary which traps its human figures in a constructivist arrangement, almost like a machine: Berlin, Symphony of a Great City.

Contrasting genealogies can be located in the pioneering and independently produced People on Sunday, with its “neorealist” portrait of the environment, as well as in the changing representations of class in Weimar films: from the hyper-dramatic contrast between rich and poor (The Joyless Street) through Gerhard Lamprecht’s cross-sections of the "Milljöh" (Menchen untereinander) to an enlightened sense of reality under extreme political conditions. The masterpieces of this leftist cinema around 1930 are Leo Mittler's Jenseits der Straße, Piel Jutzi's Mutter Krausens Fahrt ins Glück and Bertolt Brecht and Slatan Dudow's Kuhle Wampe, which includes the unforgettable dialogue: "Who will change the world? Those who don't like it!"

The introduction of sound gave further impulses to the virtuosity of Weimar cinema, whether in the case of M or films by Hochbaum, Siodmak's Abschied or Sternberg's The Blue Angel (with Marlene Dietrich as an urban femme fatale on a tour of the provinces). And for a brief time, as the political situation darkened, urban musical comedies such as Ein blonder Traum playfully evoked the possibility that the German film industry might truly challenge Hollywood’s global dominance. Thanks to National Socialism, however, California would instead become the preferred escape destination for Berlin’s most important filmmakers and craftsmen.

The series consists of 30 works (see below), several of which have been restored during the past decade. "Stürme der Leidenschaft" (1932), long presumed to be lost, was recently rediscovered in Tokyo and will be screened in Austria for the first time in 80 years.