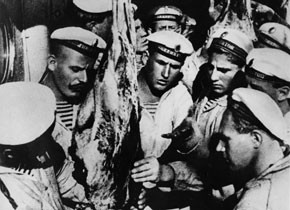 The German "Battleship" by Sergej Eisenstein and Edmund Meisel

In 1930, at the beginning of the sound film era, Sergej Eisenstein's instant classic Battleship Potemkin (1925) returned to German-language screens: as a "talkie" with synchronized sound on shellac discs. The Russian soldiers spoke German dialogue courtesy of the actors from the leftist Piscator Theatre in Berlin. And Viennese composer Edmund Meisel, who with his original score had strongly contributed to the film’s success in Western Europe, reworked his music for the talkie version, adding sound effects and songs to the soundtrack. Just a few months later, Meisel died after an appendectomy at the age of 36 – and, in contrast to the silent original, the sound version of Battleship Potemkin was soon forgotten.

In 2000, Martin Reinhart discovered the long-lost soundtrack discs in Vienna’s Technical Museum, initiating a reassessment of the film along with an international digital reconstruction project. The result is a unique and powerful audiovisual experience – and a testament to Meisel's score, praised by Theodor W. Adorno and Hanns Eisler as highly unconventional and original music. Following a series of acclaimed screenings abroad (including the prestigious Pordenone Silent Film Festival), the reconstructed sound version of Battleship Potemkin now returns to Vienna, where its second life began 15 years ago. The film is now also available for loan as a Digital Cinema Package for cultural venues worldwide.

This presentation is organized in partnership with the Vienna Technical Museum. Prior to the screenings, film historians Martin Reinhart (Vienna) and Thomas Tode (Hamburg) will present a lecture on the Eisenstein-Meisel collaboration.

The reconstruction is a joint project by the Berlin University of the Arts, the Austrian Film Museum, and the Vienna Technical Museum. For its DCP presentation and DVD release via Edition Filmmuseum it was revised and remastered in 2013/14 by the Austrian Film Museum. The new 2-Disc DVD contains multiple versions of both "Battleship Potemkin" and of Eisenstein's "October," both featuring original music by Edmund Meisel.