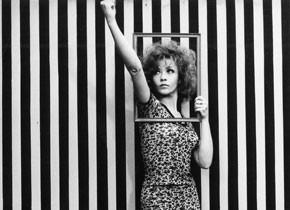 This thematic series of films examines the period around 1968 through a special prism: the cinema’s representation of sex. The title pays hommage to Amos Vogel's famous book Film as a Subversive Art (1974), whose first German edition was entitled Film Against Taboos. The book’s original cover design showed a picture from Dusan Makavejev's "scandal film" about the Viennese psychoanalyst Wilhelm Reich: W.R.: Mysteries of the Organism (1971). Reich's sexual-political research had provided a theoretical foundation for the "sexual revolution" of the late 1960s and early 70s, a context which is being evoked more frequently today, between the 50th anniversary of Reich's death and the 40th anniversary of the events of May 1968. The Austrian Vogel, who, like Reich, emigrated to the U.S. in 1939, takes a very open approach in his book. The spectrum of filmic taboo-breaking that he describes covers all areas: underground films, propaganda films and documentaries as well as art cinema and pornography. The selection of works for this show follows his example – it includes all "layers" of cinema, from avant-garde classics to films d'auteur – Bertolucci, Oshima, Pasolini, Makavejev, Ken Russell – to sexploitation films from Japan, France and the U.S. This stance reflects a certain scepticism toward any attempts to define overly sharp boundaries, whether of ideology, morals or taste. As was the case with the transformation of sexual mores in general, the explosion of sexually loaded films in the 60s and 70s was an extremely ambiguous affair. The relative speed with which explicit sexuality became part of everyday culture and a topic open to „normal”, middle-class discourse was due to a shift in values which began long before 1968. Sex had turned into a commodity and into a "problem". Seen against the background of economic prosperity in the post-War years and the modernization of social control mechanisms, the much-vaunted „liberation” might be better understood as a gradual „marketing” and politicization of sexuality: it became legible as a terrain intricately involved with questions of power and knowledge. In this context, the role played by the countless court cases involving obscene writings or images, particularly in the U.S., can hardly be overrated. The battles fought by the publishers of supposedly "immoral" literature between 1955 and 1965 soon spilled over into films. For example, the fuss in the U.S. media and courts about the Swedish import I Am Curious – Yellow (1967) can be considered a milestone for the rapid expansion of the „sexual liberties” taken by cinema after 1968. A half-decade earlier, however, the New York underground had already begun to raise the stakes. The popularity of this sector in the 1960s is inseparable from the fact that sex acts were being represented to an unprecedented extent. 1963, the annus mirabilis of the American underground film, saw the creation of three principal works which were not just explicit but stood outside all heterosexual norms: Kenneth Anger's Scorpio Rising, Jack Smith's Flaming Creatures (Jonas Mekas ended up in jail for organizing a screening), and Christmas on Earth, the legendary film by 18-year-old Barbara Rubin. Around the same time, Kurt Kren shot the first films of Viennese Actionism. His formal intensity and uninhibited choice of subjects influenced an entire generation of European independent filmmakers, a group which soon expanded to include feminist positions, too. As a counterpart to the "sex films" of the American avant-garde (by Stan Brakhage, Carolee Schneemann, George Kuchar and others), the show also presents numerous examples from Europe, including works by Frans Zwartjes, Hellmuth Costard, Jean-Pierre Bouyxou, Werner Nekes & Dore O., Roland Lethem and VALIE EXPORT. Towards the end of the 60s, the boundaries between this independent film culture and the commercially motivated sexploitation cinema had become fluid (as evidenced, for instance, by the development and reception of Andy Warhol’s and Paul Morrissey’s oeuvres). As far as the censors, the mainstream press, and curious (or outraged) audiences were concerned, both camps, whatever their aesthetic differences might be, were promoting the same disintegration of morals and culture. The self-image of many B-movie makers was equally fluid: directors of „sex flicks” such as Radley Metzger, Wakamatsu Koji, Joe Sarno and José Bénazéraf often saw themselves as allies of the artistic and/or political avant-gardes of their time. Two threshold films from 1970 demonstrate this short-lived "toxic mix" between the two factions particularly well. Mona, the Virgin Nymph is a pioneering work of modern American hardcore cinema. In contrast to the post-1972 „porn classics” such as Deep Throat, Mona is still marked by a dry humour, a certain existential sadness and quasi-documentary gestures which had also distinguished many underground and sexploitation films in the 60s. Radley Metzger’s The Lickerish Quartet, on the other hand, with its cultivated Mediterranean ambience and its incisive self-reflection, is highly indebted to European art cinema. It was on this terrain that the subsequent media battles about "sex in the movies" were mostly fought, with additional ingredients such as blasphemy (The Devils) or Hollywood superstardom (Last Tango in Paris). These art films also increasingly challenged the by now omnipresent consumerist notion of "sexual freedom". The most radical cases were Thierry Zéno's Vase de noces (1974), Oshima's In the Realm of the Senses (1976), and Pasolini's Salò/The 120 Days of Sodom (1975). They linked sexuality's dissolution of boundaries with transcendence and the death drive, with desperation and annihilation, opening up chasms in the process that were difficult for even the most permissive society to accommodate. Compared to the moral unconditionality and seriousness of these films, the standardized pornographic imagery and conventions of our contemporary culture seem like a paradoxical counterpart to the genteel and repressive shields of the Victorian era.

Thanks to Olaf Möller, Nicole Brenez and Bernd Brehmer.