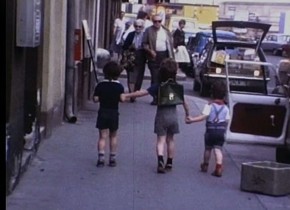 With the advent of smaller film gauges in the early 1920s, amateur filmmaking became established as a distinct and widespread cultural practice. The films of private citizens are seen today as a important element of visual history: not just for their content as historical documents, but also for the specific way in which these films deal with the medium itself. Given the increasing prevalence of digitalization, these film formats – 8mm, Super 8, 9.5 mm, and 16mm – are disappearing from public consciousness. The projectors are becoming obsolete, and the rolls of films are often on the verge of disintegration.

For these reasons, as in previous years, the Film Museum and the Vienna Library are organizing an event to celebrate the International Home Movie Day on October 15. We invite the public to bring their own home movies, as well as 'found' or inherited amateur footage, to be inspected by our experts and then projected. Starting at 11:00 am at the Austrian Museum of Ethnology (Österreichischen Museum für Volkskunde), films and projectors will be checked in by Film Museum staff members At noon, 2 pm, and 4 pm, short lectures and screenings will offer participants the opportunity to familiarize themselves with the creation of digital viewing copies, various formats, the history of amateur film, and archival methods. The Austrian Amateur Film Club will also present a programme. At 6 pm, a selection of films brought by the visitors will be screened in the large hall of the museum.

We ask visitors to bring only film material (no videos or DVDs). Depending on the number of participants, there may be delays in the schedule. We may not be able to screen all of the films offered for presentation.

The Vienna Home Movie Day is a collaboration of the Film Museum, the Ludwig Boltzmann Institute for History and Society and the Vienna Library. The event was co-organized by and will take place at the Austrian Museum of Ethnology (Laudongasse 15-19, 1080 Wien).