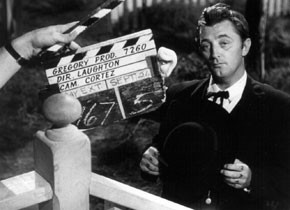 The Film Museum completes its own anniversary year with a smooth transition to another: From December 2014 to January 2015, we celebrate the work of The Film Foundation on the eve of its 25th birthday. Founded in 1990 by Martin Scorsese, the Film Museum's honorary president, with the goal of preserving American Cinema in all its diversity, The Film Foundation has since effected the restoration and preservation of about 1000 films in cooperation with the most important film archives in the United States – no other organization outside the archival world has done as much to save and protect film history.

From this vast pool of preserved films, the retrospective presents 48 works in gloriously restored film prints, focusing on a period (1928 to 1963) known as the classical era of American cinema – and extending an invitation to examine and perhaps revise this notion of the „classical“. Canonized achievements like Frank Capra's It Happened One Night, Alfred Hitchcock's Shadow of a Doubt or Charles Laughton's The Night of the Hunter are combined with overlooked films to sketch an alternative history of Hollywood: from the beginnings of sound to the collapse of the studio system; from comedies to westerns, from musicals to melodramas, from crime to war films. Yet in accordance with the mission of The Film Foundation, the scope of the series also extends beyond the boundaries of the dream factory and the standards of narrative filmmaking with a selection of shorts and documentaries expanding the potential pathways through America and its cinema.

It is not only in the lesser known areas of cinema – from the early color experiment Wonderland of California or the astonishing world war document The Fighting Lady to unknown masters of the avant-garde – that The Film Foundation has done wonders for the visibility of film on film. It has also shed new light on classic titles such as Love Affair or legendary “B” pictures like The Big Combo by making them accessible again in their original shape and form, after they had languished for decades in the public domain netherworld of bad 16mm prints. Today, even prestige productions like Otto Preminger's Bonjour Tristesse or All About Eve by Joseph L. Mankiewicz are rarely shown the way they were intended to be seen, as genuine film experiences. Now, in many cases, a digital facsimile is projected instead of the restored prints.

„American Cinema Restored“ highlights neglected masterpieces like Michael Curtiz’ The Breaking Point starring John Garfield (a superior 1950 adaptation of the Hemingway novel To Have and To Have Not) or the œuvres of such mavericks as Ida Lupino (The Bigamist). The renowned Viennese writer and stage director Berthold Viertel can be discovered as an American filmmaker with The Wiser Sex, as part of a strand in the retrospective emphasizing the contributions of Central European émigrés to the cinema of the United States. Via Josef von Sternberg, Max Ophüls and Andre de Toth (or Peter Lorre’s star turn in The Chase), this line can be traced directly to the culture of film noir – a „new wave“ that gave exemplary expression to the ruffled psyche of a nation in the 1940s (and, subsequently, the McCarthy years), before descending into complete madness in Sam Fuller's furious thriller Shock Corridor at the beginning of the 1960s. By then, a „post-classical“ era had begun, and new kinds of independent cinema had started to appear. In 1953, a boldly neorealist film such as The Little Fugitive was still an exception, but during the transition into the next decade, works like John Cassavetes' Shadows or Shirley Clarke's The Connection heralded a decisive departure towards independence.

Somewhere between these vastly different forms of individual expression and Hollywood's frequently evoked „genius of the system“ lies a gateway into one of the most fecund periods in film history – and to the tapestry that is American Cinema Restored.

This retrospective was made possible by The Film Foundation, the U.S. Embassy in Vienna, and the film archives who oversaw the 48 restorations: UCLA Film & Television Archive, Museum of Modern Art, George Eastman House, Library of Congress, Academy Film Archive, and Anthology Film Archives.

Margaret Bodde, executive director of the Film Foundation, and Kent Jones, director of the New York Film Festival, will be our guests for the opening days, while Martin Scorsese will provide audiences with a special video introduction to the series.