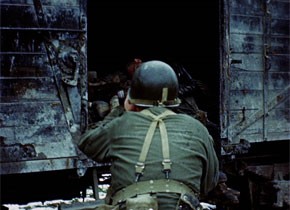 Nothing fixed the image of the Holocaust more permanently than the footage filmed at the concentration camps immediately after they were liberated: the mountains of shoes, glasses and hair belonging to the victims at Auschwitz, the tattoos on the skin of those killed at Buchenwald, the emaciated bodies of the dead at Bergen-Belsen, shoved by a bulldozer into mass graves.

In the attempt to visualize a crime that according to common consensus transcends the limits of imagination or representation, these images serve a key purpose. Their central role, however, is strangely incongruous to the lack of information about their origin and use. This program presents these films in their various contexts, contrasted and complemented by forgotten and rejected images from secret and aborted film productions as well as by privately made amateur films (including those shot by U.S. soldiers like Sam Fuller and George Stevens, who worked in Hollywood both before and after World War II). With all these documents, the focus of attention shifts from finished films to the uncut raw material, commonly known as "footage."

The series consists of eight programs and approximately 25 films, which for the most part are being shown in Austria for the very first time – with introductions by Marsha Gordon, Toby Haggith, Jeremy Hicks, Stuart Liebman, Drehli Robnik, Leslie Swift, Lindsay Zarwell and Ingo Zechner. Additionally, the April-May issue of the Film Museum series Utopie Film presents four fictional treatments of this theme, including Sam Fuller's late work, The Big Red One (May 5).

“Liberation footage – Atrocity Pictures” was conceived by Ingo Zechner and is a joint presentation of the Austrian Film Museum and the IFK – Internationales Forschungszentrum Kulturwissenschaften, in cooperation with the United States Holocaust Memorial Museum and the Future Fund project, "Ephemeral Films: National Socialism in Austria." On May 7th and 8th, the IFK hosts an international conference on the subject.