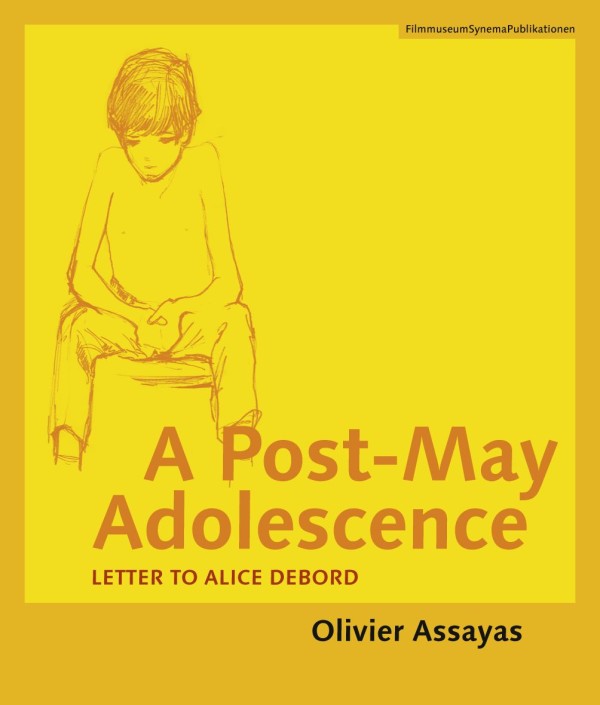 Letter to Alice Debord
Price: EUR 14.00
Olivier Assayas is best known as a filmmaker, but cinema makes only a late appearance in A Post-May Adolescence. This is an account of a personal formation, an initiation into an individual vision of the world; it is, equally, a record of youthful struggle. Assayas' reflective memoir takes us from the massive cultural upheaval that was May 1968 in France to the mid-1990s when he made his first autobiographical film about his teenage years, L'Eau froide. The movement of thought and creation known as Situationism is the golden thread that connects and, in part, inspires this memoir. The book also includes two essays by Assayas on the aesthetic and political legacy of Guy Debord, who played a decisive role in shaping the author’s understanding of the world and his path towards an extremely personal way of making films.

A Post-May Adolescence was first published in French, in 2005. Its expanded English edition is now offered as a companion book to the first English-language monograph on Assayas' body of work, also published by the Austrian Film Museum.

Olivier Assayas (*1955) is one of the most widely celebrated filmmakers working today. In 1980, he began his career as a critic for the legendary Cahiers du Cinéma in Paris and has since published several books such as Conversation avec Ingmar Bergman (1990) or Éloge de Kenneth Anger (1999), among others. In 2009, Gallimard published Présences, a collection of his essays. His film Aprés mai (Something in the Air, 2012) is closely related to the present memoir.
"A thoughtful, personal survey of Assayas's career by American critics edited by Jones and an English translation of Assayas's 2002 memoir 'A Post-May Adolescence: Letter to Alice Debord', both published in handsome volumes by the Austrian Film Museum, expose this tension in Assayas's work: between a desire for risk and a sensitive intelligence resistant to easy solutions; between allegiance to cinema 'degree zero,' a cinema of presence, and a romantic fascination with the passage of time. [...] The slim memoir, packaged with two additional essays by Assayas on Debord, is a valuable companion to the Jones collection, which is often in explicit dialogue with Assayas's analysis of his own work." (Film Comment)
"Assayas' voice is clear, urgent, and persuasive. For him the matter at hand, the subject that keeps slipping away, is the story of how he came to know the work of Guy Debord. This is nothing less that the story of his life." (Film Quarterly)
Olivier Assayas
A Post-May Adolescence. Letter to Alice Debord
And two essays on Guy Debord
Translated and annotated by Adrian Martin und Rachel Zerner
With an introduction by Adrian Martin
FilmmuseumSynemaPublikationen Vol. 17
Vienna 2012, 104 pages. In English
ISBN 978-3-901644-44-3
All publications produced by the Austrian Film Museum are distributed internationally by Columbia University Press.
Add to Cart
Related materials
Photos 2012 - Olivier Assayas
Books Olivier Assayas
Books Guy Debord. Das filmische Gesamtwerk
Program May / June 2012 - Olivier Assayas
In Person Video Document Olivier Assayas 27. November 2008
Share on