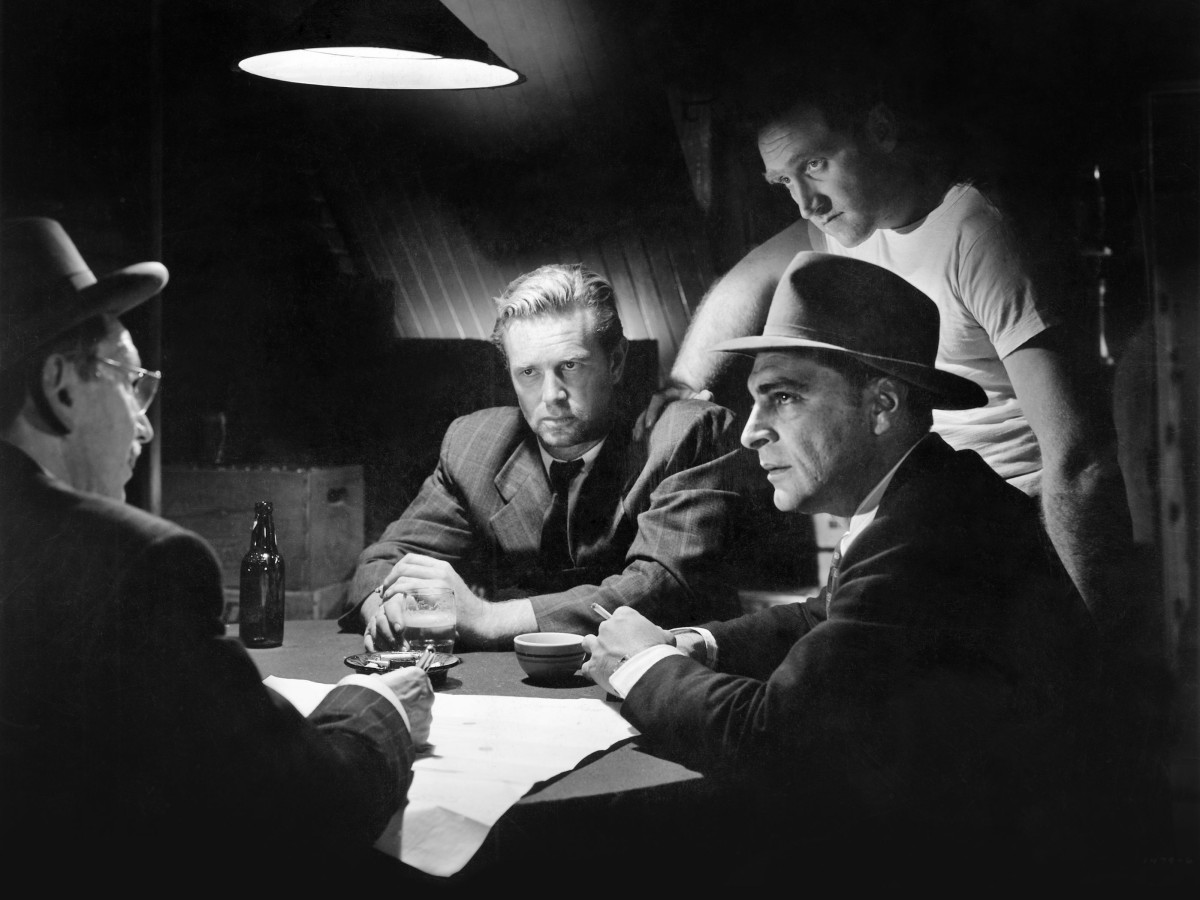 Two style-defining classical Hollywood directors, John Huston (1906–1987) and William Wyler (1902–1981), take center stage in our March program. Their films will be presented in dialogue with those of three contemporaries: Frank Capra, John Ford and George Stevens. All five directors were profoundly marked by the experiences of World War II and their filmic contributions to the U.S. Army's war effort.

John Huston stands out as one of the most prominent figures of international cinema both as director and actor. Although his films met with praise as often as dismissal, his larger-than-life presence guaranteed popularity, underpinned by a "second career" as actor in memorable roles in films such as Chinatown (1974).

The son of actor Walter Huston made his name as sought-after screenwriter in the 1930s before he turned to direction. As a superb director of actors, he catapulted Humphrey Bogart to noir stardom with The Maltese Falcon (1941) and helped his father Walter win an Oscar for the role in the iconic adventure film The Treasure of the Sierra Madre (1948). As a brilliant storyteller, he added another major work to the classical film noir period with The Asphalt Jungle (1950), but always remained unpredictable. Cultivating the image of an adventurer, big game hunter (in The African Queen (1951), among others) and ladykiller, he took great pleasure in the role of stylistic maverick leaping across genres at will.

Despite this seeming arbitrariness and his self-fashioning as a hard-boiled character, a melancholy, split worldview permeates Huston's work. It can be seen in the medieval ballad (and '68 allegory) A Walk With Love and Death (1969), the great boxing film Fat City (1972) and literary adaptations such as the project closest to his heart, the Kipling adaptation The Man Who Would Be King (1975), Under the Volcano (1984), a film based on a novel by Malcolm Lowry, and the touching parting work The Dead (1987), an adaptation of James Joyce's short story. Huston's late films are the arena where his lifelong themes manifest themselves most strongly. His characters are traumatized, plagued by alcoholism and other demons and inevitably doomed to failure. Their integrity and dignity is demonstrated in their courage and surrender in the face of an indifferent, godless world.

In 1984, the Film Museum showed a complete retrospective of Huston's films. Now we present a selection of his work in dialogue with films by his colleagues and rivals – in particular the Alsatian-born William Wyler, whom he helped launch into fame with scripts written for great hits such as A House Divided (1931) and Jezebel (1938). He remained Huston's lifelong soul mate: "Willy was certainly my best friend in the industry." Wyler's role as the leading American director of his generation is uncontested. Tackling a wide range of genres – from the dramatic register to romantic comedy Roman Holiday (1953) – and despite all the differences in the air and tone of his work, Wyler exhibited the same kind of deep, humanist sensitivity as Huston. However, his oeuvre, which was disparaged as "academic," could not claim the prestige of an auteur since he so ostentatiously placed subject and acting above style. At the same time, his work with cameraman Gregg Toland anticipated the revolutionary deep focus of Citizen Kane (1941).

What's more, Wyler's masterpiece The Best Years of Our Lives (1946) is emblematic for the processing of the common experience of World War II. Just like Huston, Stevens, Capra and Ford, Wyler joined the War Department of the U.S. Armed Forces. For these "big five," it was to become the galvanizing point for their careers. War documents made by Wyler, Ford and Huston, who partly restaged The Battle of San Pietro (1945), turned out to be pinnacles of cinema. All five filmmakers returned to the studio system after the war, to a world whose ethical, aesthetic and social norms had been completely shattered.

Our retrospective strives to make this turning point visible – incidentally, at its most evident in the work of underrated "craftsman" George Stevens. Getting his training as cameraman and gagman for Laurel and Hardy, Stevens became an expert in comedy and musical before the war. However, after shooting U.S. troops from D-Day until the end of the war, his films underwent a sea change as he focused solely on sober subjects, as in A Place in the Sun (1951). While the epochal western Shane (1953) saw him make use of allegorical means, in The Diary of Anne Frank (1959) he directly addressed the crossroads in his life and career path: the liberation of the Dachau concentration camp and the exposure of the Holocaust.

Frank Capra, the only director who never saw the front, masterminded the style of the U.S. film propaganda unit back in Washington. His celebrated works made between 1939 and 1948 demonstrate a bitter disillusionment culminating in It's a Wonderful Life (1946). The shadow Capra cast over his popular American dreamworld caused a flop that bankrupted his independent production company Liberty, founded together with Wyler and Stevens.

Despite all the pain they captured, Capra's homecoming films, much like Wyler's The Best Years of Our Lives, were not without hope, while John Ford's They Were Expendable (1945) imbued the frontline with resignation. Ford saw the Second World War as a chance at redemption since he hadn't taken part in the First. His major works Pilgrimage (1933) and The Long Gray Line (1955) seem like an interim and final assessment: in spite of the life-threatening effort, he remained "really a coward" in his own eyes – just like Huston's characters, wandering along the fine line between courage and cowardice without ever finding release.
Share on