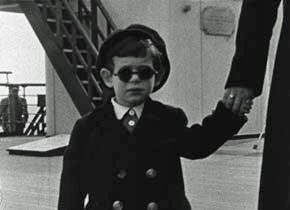 To mark the 75th anniversary of the November pogroms: not a memorial service, instead the presentation of a new project. No retrospective screening, instead a more complex look at the collections of Nazi material in the Austrian Film Museum and the United States Holocaust Museum. And a view towards possible future methods of dealing with so-called "ephemeral films” – artefacts such as home movies, corporate films, or commercials, whose lifespan is usually much shorter than that of “regular,” big-screen cinema.

Private moments in home movies of Jewish families, which subsequently became traces of those who disappeared, who were expelled and exterminated. Perspectives from travelers who recorded the madness that spread throughout the day-to-day life in Vienna in 1938. Works created out of complicity between cameramen and the mob.  And, not least: accidental revelations. And many ambivalent images. Mostly filmed in now-obsolete formats and existing only as single, fragile copies, these short films give us the opportunity to once again consider the relationship between film, history and historiography, and to find new answers to the question of the relationship between analog and digital media.

Instead of talking and writing about films, are there ways to annotate them, like creating footnotes to a text? And can these notes be expanded to include other images and sounds? What would non-exclusive access to these films look like, a type of access which would still respect the peculiarities of their original formats? A novel technology of synchronized film annotation, 25 annotated movies and a new website will try and answer some of these questions.

A joint presentation of the Austrian Film Museum, the United States Holocaust Memorial Museum and the Ludwig Boltzmann Institute for History and Society.  Project management: Ingo Zechner, Michael Loebenstein. Humanities-IT: Georg Kö.  Partially funded by the Zukunftsfonds of the Republic of Austria.