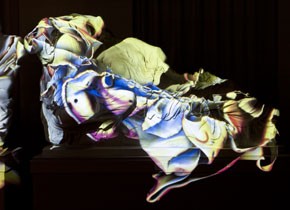 The methods and metaphors of digital image processing were developed by the military in the 1950s. In the course of half a century, these methods have become intertwined with nearly all human endeavors and creative processes: computers, smart phones, digital cameras can no longer be separated from society and its mantra of ongoing optimization. Yet, in contrast with the traditional arts where the influence of each tool and technique on the resulting work has always played a major discursive role, the inherent aesthetic possibilities and "materials" of digital image production are rarely reflected upon.

The two programs and master class that comprise the program "Penetrating Surfaces" explore the "ghost in the machine." In the commercial framework, these specters usually operate silently, ignoring any flaws induced in the system. By focusing on the tools of their trade, the international artists assembled here choose to challenge the algorithmic mystery of the "black box".

Examples of such procedures can be found in the virtual decomposition of the actual artist studios of Takeshi Murata and Billy Grant (USA) and in the feverish encyclopedias of Yves Netzhammer (Switzerland) where universal observations of society are conducted with surgical precision. On the other hand, Saskia Olde Wolbers (Netherlands) works with sterile spaces which seem to derive from computer graphics but are actually constructed with analog means and charged with fictional elements.

Alternating between unexpected artifacts and artificial beauty, the visual worlds created by these artists stand in constant dialogue with art historical discourses. While commercial software always aims to achieve a “perfect” surface – photo-realism rendered in real time – the works in this show look for ways of piercing that surface. So that fragments of reality may shine through the layers of its mathematical decomposition.

The program, curated by the artist Robert Seidel, is jointly presented by the Film Museum and VIS Vienna Independent Shorts. During the Master Class, Seidel and Tina Frank will discuss some forms of "penetrating digital surfaces" in connection with Seidel's own works.