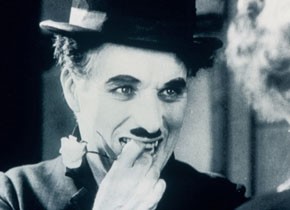 Were one to ask who might best represent the true face of cinema the answer could well be Charlie Chaplin as the Little Tramp. He was the first international icon of cinema, his art was regarded as the Esperanto of the media age. His facial expressions and gestures, as well as his journey through the reality of the twentieth century were readily understood in every corner of the globe. Chaplin’s simple and direct stories crystallize the universal human condition: how to make sense of everyday chaos, how to mend a broken heart, how to keep hope alive. His cinema is good-natured, full of sentiment, and often brutally optimistic, yet his greatest films are possibly those where laughter is accompanied by shades of darkness, films such as Work (1915), Shoulder Arms (1918), The Kid (1921), The Gold Rush (1925), The Great Dictator (1940) or Monsieur Verdoux (1947).

This extreme immersion in the most fundamental of emotions, desires, and fears is also the reason why Chaplin was at one time considered suspect in certain circles – those cinephiles who preferred the cooler, more abstract comedy of Buster Keaton. This view contributed to a narrowing of the perspective on Chaplin’s work so that fewer and fewer films were readily screened – The Kid, The Gold Rush, The Circus (1928), City Lights(1931), and Modern Times (1936); that is, the last of his silents and his earliest sound films. And, as so often happens in cases like this, one would start to view these films only through the prism of traditional clichés. But Chaplin’s work is not the product of a simple, sentimental mind. Even his greatest skeptics were reminded of this upon seeing Monsieur Verdoux, one of the most cruel and cynically clear-eyed films of the post-war period.

A reassessment of Chaplin demands a review of the complete oeuvre, a large part of which is now fully restored. For the first time in several decades, the Austrian Film Museum presents Chaplin’s work in its entirety: from his debut appearance in Making a Living (1914), directed by the Viennese Henry Lehrman, to his last film, The Countess From Hong Kong (1967, starring Marlon Brando and Sophia Loren) – from his early crawling as a newborn of the cinema to the late works, which are characterized by a uniquely beautiful and fragile kind of poetry.

Charles Spencer Chaplin was born into show business in 1889, in London. His parents were music hall performers and it wasn’t long before young Charlie joined them on stage. Chaplin’s first vocation, as well as the basis for his film art, was pantomime: he was a star in Fred Karno’s world-famous slapstick troupe, with whom Chaplin toured the U.S. on numerous occasions. During one such engagement, in late 1913, Chaplin was ‘discovered’ by Mack Sennett, who immediately recruited the young comedian for his production company, Keystone. From January 1914 on Chaplin was in the film business; after a year with Keystone he left for Essanay Studios (1915), greatly increasing his salary in the process, and soon earned an even more generous contract with Mutual (1916/17), along with near-total autonomy. In the first five years of his career, Chaplin directed 60 films, all short comedies, the earliest of which he turned out at a pace of one per week. Looking back, one is astounded by Chaplin’s lightning-fast evolution: his work improved by quantum leaps in just a few months time. Watching the films in order, from 1914 to 1917, is to experience the self-discovery of a genius.

At Keystone, the films were mostly improvised on-set, as a series of purely physical gags which often attained a rondo- or canon-like musical structure. Experimentation ran rampant, old gags were recycled and vaudeville, music hall and pantomime classics were plundered for material. Chaplin worked constantly on refining earlier works – note, for example, his many riffs on the image of the ‘tottering drunkard.’ Going beyond these early efforts, Chaplin soon developed a completely distinct and ever-expanding mode of production. He would start with an idea and then ‘discover’ the movie during shooting, often running into dead ends and tossing out hours of footage until he found out how the film could finally work.

Chaplin’s working methods are better documented than that of the other film pioneers because thousands of feet of outtakes from the Mutual period were saved and later used by Kevin Brownlow for his epic documentary, Unknown Chaplin. As these materials show, Chaplin’s perfectionism, his steady rise towards a dizzying virtuosity has no summit – rather, his art is one of broadening out, an evolution without an endpoint, a constant reinvention of things.

Though ‘Chaplin-mania’ had already erupted across the globe in 1917, Chaplin’s fame reached its zenith during the late 1920s and early 1930s. Massive crowds greeted him wherever he went (including a 1931 appearance in Vienna where he was recorded for the first time on sound film). It is perhaps significant that Chaplin’s popularity waned as his work became more overtly political: The Great Dictator is still one of the most amazing anti-fascist films of all time, and A King In New York (1957) one of the most subtle commentaries on Senator McCarthy and his band of blacklisters, who drove Chaplin from the United States in 1952. Chaplin settled in Switzerland where he died on Christmas Day 1977, after a great deal of (late) appreciation and a knighthood bestowed upon him by Queen Elizabeth.

The Film Museum presents a complete retrospective of all surviving (and authorized) Chaplin films. Additional documents will be shown, including Kevin Brownlow’s two films about Chaplin. The show has been organized in collaboration with the Chaplin Office in Paris, the “Chaplin Project" of the Cineteca di Bologna and the BFI National Archive in London. It will open with two lectures from Kate Guyonvarch (Chaplin Office) and Cecilia Cenciarelli (Cineteca di Bologna).