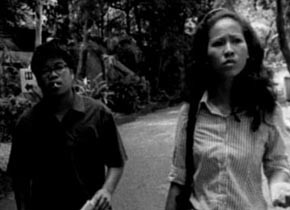 In Venice, Locarno and New York

The Austrian Film Museum is pleased to announce that two of its recent restoration projects have been selected for presentation at the international film festivals in Venice and Locarno. Both films represent key works in contemporary Asian cinema, whose survival was endangered due to the fact that the original film elements were lost or not appropriately preserved. They also demonstrate that a film does not have to wait decades to require restoration but sometimes needs attention as early as 10 to 15 years after its original theatrical release – particularly when it comes from a highly independent production context.

In early September, the 70th Mostra del Cinema in Venice will host the world premiere of the restoration of Apichatpong Weerasethakul’s debut feature, Mysterious Object at Noon, which was jointly carried out by the Austrian Film Museum and the World Cinema Foundation. Early October, the US-premiere of Mysterious Object at Noon will take place during the 51st New York Film Festival.
The Thai director, who was awarded the Palme d’Or in 2010, produced his first feature on a shoestring budget: a fascinating “road movie”, shot in grainy black & white, which melds “direct cinema” techniques with a fairytale story that unravels during a cross-country journey throughout Thailand. Shortly after the film’s completion, its original 16mm camera reversal element disappeared. Working from a 35mm duplicate negative with burned-in English subtitles, which Weerasethakul deposited with the Film Museum for safe-keeping in 2007, the restoration applied digital technology to make the film accessible again. A new 35mm internegative and print were also produced.

In August, the Locarno International Film Festival will present the Film Museum’s restoration of Lav Diaz’s five-hour epic, Batang West Side (2001). The Filipino director’s first masterpiece (and his last to be shot on celluloid film) was produced in New Jersey and in the Philippines. Starting as a crime-thriller focussing on a drugs-related death, the story quickly metamorphoses into an intense study of identities – not only of the police detective and the crime victim but of the very world which they inhabit: the Filipino diaspora in the USA. The original negative, on deposit with the Austrian Film Museum, served as the source for the newly graded 35mm print with restored sound. Lav Diaz, who serves at the head of the jury in Locarno this year and whose most recent film, Norte, recently screened to much acclaim in Cannes, will personally introduce the screening of Batang West Side.

Batang West Side
Preserved in 2012/13 by the Austrian Film Museum from the 35mm negative. Colour grading and sound restoration carried out at Synchro-Film, Vienna, in close collaboration with Lav Diaz.
Share on