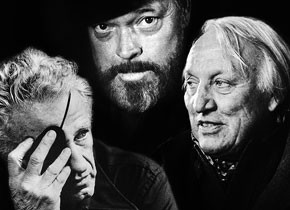 Three veritable giants of cinema are at the center of the Film Museum's May-June program. Through their struggle for artistic autonomy, they created new possibilities for cinematic storytelling: Joseph Losey, Nicholas Ray, and Orson Welles, who was born 100 years ago, on May 6, 1915.

The fact that these three non-conformists are all three "Sconies" (born in Wisconsin) is only the first common factor in their careers. There were all deeply rooted in the progressive liberal politics of the Roosevelt era, which manifested itself artistically first in the theater and on the radio. All three landed in Hollywood and made their feature film debut with RKO, Welles shortly before, and Ray and Losey just after the war, as a new generation of directors was being recruited and Howard Hughes took over the studio. The paranoia of the Cold War with its witch-hunts and the House Un-American Activities Committee (HUAC) run by Wisconsin Senator Joseph McCarthy had somewhat dramatic consequences for the lives of the three directors. All three were under surveillance by the FBI for many years and all three ended their film careers in Europe.

With his entry into Hollywood, Orson Welles (1915-1985) created a work for eternity: Citizen Kane, the story of a legendary life that turned into a lifeless legend. For the production, Welles took half the ensemble of the Mercury Theater, which he ran together with John Houseman, from New York to RKO. The complex structure of the film's images and sound and of its narrative set a new standard, and the radical modernity of Citizen Kane remained valid for decades – until the arrival of Jean-Luc Godard, who said about Welles: "Everyone will always owe him everything."

At the time it was released, the lean box-office grosses for Kane overshadowed its artistic triumph, and with The Magnificent Ambersons, Welles' bumpy and erratic relationship with the film industry continued. That film was re-cut by the studio, but nevertheless remains a testimony to the genius of its director. The same holds for The Lady from Shanghai, a sparklingly nasty film noir starring Welles and his then-wife, Rita Hayworth; even before the film arrived in theaters in 1948, the filmmaker was already in exile in Europe. In total, Welles finished only 13 feature-length films, including Othello, Touch of Evil, The Trial, Chimes at Midnight, and F for Fake – each a masterpiece in its own way.

Nicholas Ray (1911-1979) considered Welles one of "the greatest directors in the history of cinema." Ray himself was tall, lanky and handsome like a western hero; he spent time at Taliesin, Frank Lloyd Wright's artists' colony, joined the avant-garde Worker's Lab and studied American folk music. In 1947, his mentor at CBS, John Houseman, helped arrange his directing debut. With They Live by Night, half film-noir and half juvenile delinquent romance, Ray became the "poet of nightfall" (François Truffaut).

Ray was the most important filmmaker at RKO during the Howard Hughes regime; he directed the Hollywood drama In a Lonely Place and the modern Western, The Lusty Men, and became the indispensable savior of bungled productions, helping him avoid the Blacklist as well as having to testify in front of the Senate committee. Ray's most outstanding works, however, were produced while he was out on loan; Johnny Guitar at Republic, Rebel Without a Cause at Warner's, Bigger Than Life at 20th Century Fox, Party Girl at MGM, etc. The dynamic mise en scène of these expressive color films only makes their characters, who are mostly driven by hate (Mercedes McCambridge as the rancher Emma) and despair (James Dean as rebel Jim Stark), appear all the more angry at themselves and others.

No one ever gave a bad performance in a Ray film, according to critic Robin Wood, "not even Anthony Quinn." The same can be said about Nicholas Ray himself. With the figure of "Nick" in Lightning Over Water (1980, co-directed by Wim Wenders), the terminally ill filmmaker – hero to an entire generation of young filmmakers – openly confronted his own death.

Joseph Losey (1909-1984), after study trips to Europe and the Soviet Union, brought current events to the stage with the New York theater project, The Living Newspaper, and in 1936 cast Nicholas Ray as a labor leader. "Later at RKO," remembered Losey, "Nick and I roamed the empty studios to avoid being seen together in the offices, trying not to inflict any damage to each other in the political climate of the time." For the Brechtian Losey, art is above all a medium for social criticism. Hollywood, where in the span of four years he made five exceptional films about society's outsiders (including The Lawless, an anti-lynching polemic made with non-professional Mexican actors), was only a way station for Losey. In 1951, he refused to obey a HUAC subpoena and was prohibited from working in Hollywood. He evaded the ban by moving to London, flocking together with other blacklist victims in order to continue his career – under a pseudonym.

Numerous Losey works from this period remain to be rediscovered on a wider scale, such as Time Without Pity, Blind Date and The Criminal. From film to film, the director's vision grows darker, the camera more unsteady, the mise-en-scène, often driven by jazz scores, becomes increasingly complex in its use of mirrors and mirror images.

The Servant (1963) was Losey's international breakthrough. Here, together with screenwriter Harold Pinter, Losey performs an autopsy on British class society, as they also did in later collaborations, Accident and The Go-Between: in The Servant, the tragedy of three characters begins realistically with hints of the Profumo affair, then grows into a delirious nightmare and ultimately establishes the director's reputation as a modernist and stylist of the highest rank.

The monumental loser, the romantic outsider with self-destructive tendencies, the eternal exile: with all the admiration that exists for Orson Welles, Nicholas Ray and Joseph Losey it has also become common to speak of them as “Hollywood failures”. The truth is actually the opposite: Hollywood and the studio system failed Welles, Ray and Losey – three filmmakers from the Midwest, who with their work transcended industrial cinema and ultimately left it far behind.

The six-week retrospective includes 44 works – a rich selection from the oeuvres of these three directors, aiming to represent their artistic creation as well as their biographical paths. Michael Omasta, co-curator of the exhibition, will give three extended introductions on Losey, Ray and Welles.