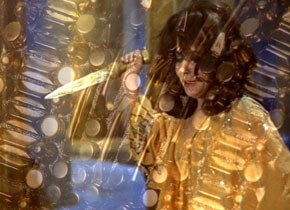 The work of artist Michael Robinson (*1981 in Plattsburgh, New York) has been heavily featured at film festivals and in exhibition contexts (e.g. at the Whitney Biennial) for the last ten years. Following the notion of "reflected nostalgia" (Svetlana Boym), it can be summarized thusly: What unifies these films – their gestures, their form, their concerns – is the tension between melancholia and optimism in dealing with the past, through cycles of images which constantly appear, disappear and reappear. This is manifest most clearly in his found-footage films, which account for the greater part of Robinson's oeuvre – and also those in which his preoccupation with two (seemingly contradictory) traditions in American culture is most apparent: Methods of structuralist film – flicker, the material on display, reflexivity – collide with archaeological relics from popular culture, from music videos by the King of Pop through fragments of sitcoms and classic Hollywood films to animated cartoons.

This form of nostalgia is productive because it deliberately oscillates between a longing for the past and an attempt to revive it (in mutated form). Robinson tackles the feeling of nostalgia emphatically in order to burst through it and think ahead. Just as the blue expanse of a boat on the sea in All Through the Night may be perceived as sad, so the exploding television set in Light is Waiting comes across as enthusiastic. Robinson discovers as much beauty in the phenomena of analog film (Chiquitita and The Soft Escape) as he does in the excesses of digital image manipulation (What a Fool Believes). The present and the lost beget a future – crying, laughing, thoughtful, scared, singing along, analytical, playful.

Michael Robinson will be present for Q&As after both screenings.