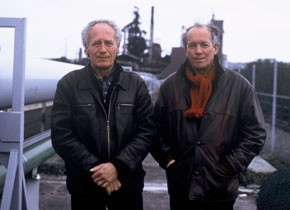 Jean-Luc and Pierre Dardenne and films by Benoit Dervaux

With their last four films, the Belgian brothers Jean-Pierre and Luc Dardenne have established themselves at the forefront of contemporary filmmaking. They have twice been awarded the Palme d’or in Cannes, for Rosetta (1999) and for L'Enfant (2005). The Film Museum is now presenting the first Retrospective of the Dardennes' work in Austria. Both directors will be speaking about their work at the Film Museum.

Alongside their better-known films, this series will also present the early work of Jean-Pierre and Luc Dardenne. One can trace a distinct path from the documentaries which they made in the 1970s and 80s to their later works; these owe their unique strength to an enagement with “documentary” techniques. The accompanying programme forms a complementary loop of its own: three documentaries by Benoit Dervaux, who has been responsible for the distinctive hand camera work in the Dardennes’ feature films. Dervaux's works, with their pronounced focus on society’s outsiders, are thematically and "ethically" related to the brothers' films, and were also produced by Jean-Pierre and Luc Dardenne.

The two filmmakers (born in 1951 and 1954 respectively) grew up in the steelworking town of Seraing near Liège. After their studies (acting for Jean-Pierre; philosophy for Luc), they both returned to their home region to investigate the possibilites of film and video. After a few short interventionist videos about the effects of widespread recession, they founded their own production company, Dérives, in 1975. Starting in 1978, a cluster of works of astonishing diversity was created in Seraing: videos about the strikes of the 1960s, about the free radio stations in Europe, and the history of Poland as told by emigré Poles working in Belgium. This interest in society's "losers", contemporary problems and social utopias; the documentary viewpoint; and above all the willingness to find (hi)stories in their hometown of Seraing – all of these aspects already point to the Dardennes' later works. They speak about what they know and about where they live.

Their uncompromising feature film style was perfected with La Promesse (1996), which is distinguished by the great naturalness of the actors and their gestures and movements. As of Rosetta, the films are characterized by a restless hand camera which creates a palpable physical tension between the actors. Questions concerning work, society and ethics are powerfully tied together in these stories; in Rosetta, for example, work and dignity are inseparable.  The films have nothing to do with didactics; the relationships are as complex as in reality, and all figures are deeply ambivalent.  The influence of Robert Bresson can be seen in the connection between materialistic style and spiritual content; the Dardennes' films are not just precise portrayals of society, they are also fables about the struggle for grace.

This presentation is jointly organized with the Festival & Forum of European Film in Vienna. Jean-Pierre & Luc Dardenne as well as Benoît Dervaux will be present at the Austrian Film Museum.