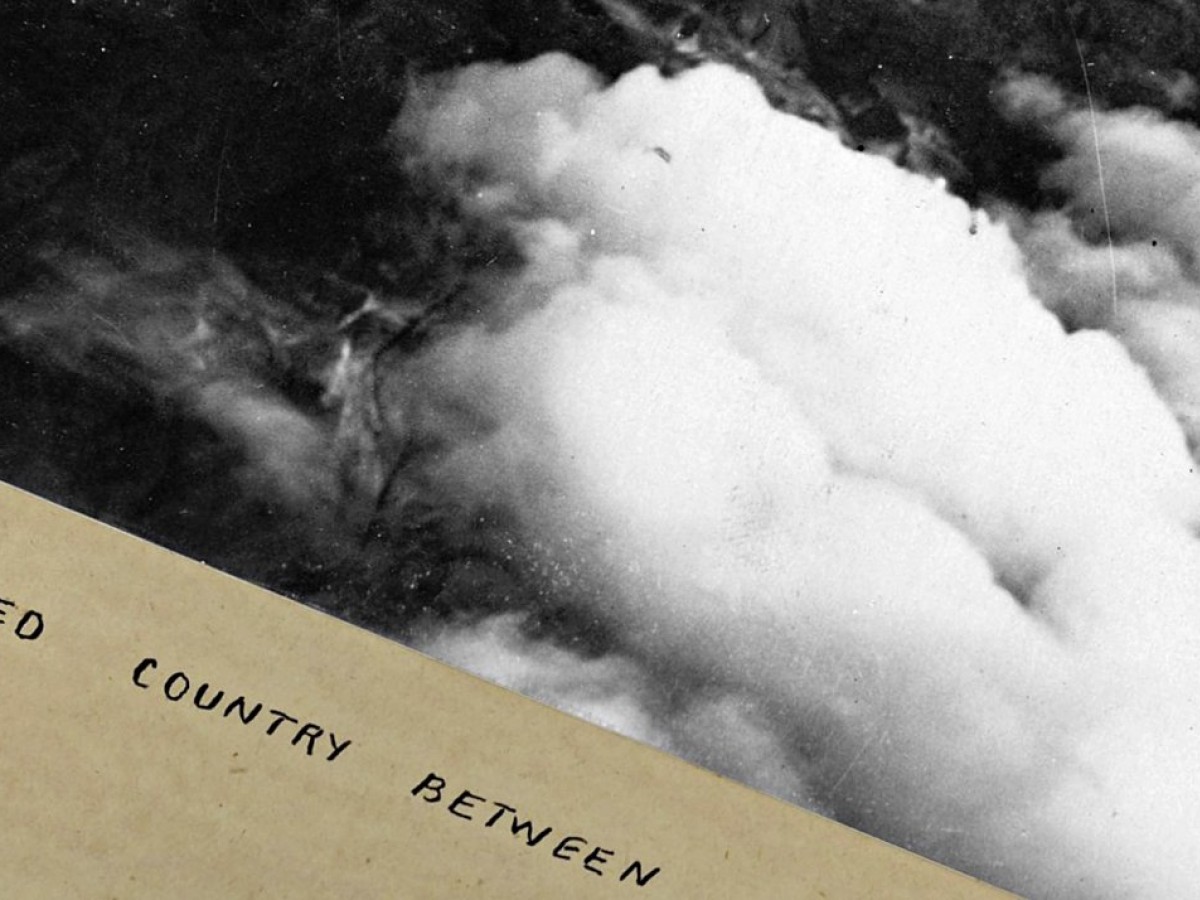 Strange Object Miranda Pennell. GB, 2020, 15 min. English
A red leather-bound album in the basement of The National Archives in London containing black and white aerial photographs of the so-called Z Unit, a remote territory and its people flung out at the edges of a vast empire. Is it an investigation into an ancient civilization? The covert documentation of an enemy force? Or the fictional evidence of an invented world? These questions and many more are raised in Pennell’s enigmatic essay on historical erasure, the fabrication of images, and technologies of terror as developed by an imperial power in a past not as distant as we like to think. (David Perrin)

Een weefsel van licht Bram Ruiter. NL, 2021, 11 min. Dutch with English subtitles
A series of fragmented recordings of six people pondering what they think might be on an undeveloped Super 8 cartridge becomes the point of departure for this film that subsequently free associates and meditates its way through ideas ranging from the limits of knowledge and perception, the mysteriousness of existence to the endless possibilities of the imagination. A stream of consciousness in images that are as abstract (scratches and swirls of light in the dark) as they are concrete (an expanse of blue sea) in their visualization of unprocessed dreams, desires, and potential futures. (David Perrin)

"Le-deu-pil-teo-ga cheol-hoe-doeb-ni-da." Kim Minjung. KR, 2021, 12 min. Korean with English subtitles
If you look into the entrance of one of the huge caves on the Korean island of Jeju, it looks like a camera lens. If you walk into the cave, it looks like a screen, a rectangle showing clouds and white light, just like a film. Director Kim Minjung delves into the bloody history of Jeju, where tens of thousands were killed in a massacre in 1948. The camera follows the traces in the landscape, sometimes transformed by a strident, distance-creating red light, accompanied by a commentary by avant-garde filmmaker Hollis Frampton. Film as a means to address history and its taboos. (Gunnar Landsgesell)

Nesting Endless Karl-Heinz Klopf. AT, 2021, 25 min. English/German with English subtitles
At the beginning, we are inside what seems like the ultimate art installation: stylish-looking tables turning, reflected in mirrors to infinity. But this vision is impossible: it turns out to be a digital animation of a work in two interlocking pieces, the "Nesting Table" designed by Friedrich Kiesler in 1935. Now seen in reality, a group of artists gather around and contemplate it, try different poses, and compare their photo documentation with Kiesler's. Nesting Endless is an experiment in mapping, an attempt by Karl-Heinz Klopf to recapture the playfulness and provocation of the original work. (Adrian Martin)

Night Colonies Apichatpong Weerasethakul. US/TH, 2021, 14 min. Thai with English subtitles
In the expanded cinema of Apichatpong Weerasethakul, nature and technology are never set into opposition. Lights, camera, electricity, sound mixing: all these constitutive elements of the film/video medium interweave with the given materials of the world. Night Colonies studies the actions of hundreds of bugs on a white bed. There is no probing micro-photography, no attempt to mimic the insect point-of-view. Voices from political demonstrations in Bangkok are occasionally filtered in. An indirect response to the pandemic, it pictures a bug-eat-bug community that is also strangely peaceful. (Adrian Martin)

With Karl-Heinz Klopf in attendance

Mi 27.10.2021 16:00download iCal
No reservations accepted for screenings from October 21 to 31, special ticket regulations apply during the Viennale. Tickets are available exclusively at the Viennale box offices, via telephone at 01/526 594 769 or via www.viennale.at.
Share on