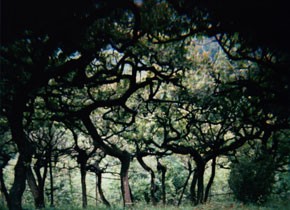 Robert Beavers. My Hand Outstretched to the Winged Distance and Sightless Measure

November 19 to 28, 2010
The twenty films made by the American Robert Beavers represent a special kind of invitation. Marked by an electrifying, lyrical and rigorously distilled aesthetic, they lead the viewer into a realm of wonder that is unique to the medium of sound film. As Beavers has stated, the goal of his work “is for the projected image to have the same force of awakening sight as any other great image.” The locations and references in Beavers’ work also evoke older histories: Florence and Venice, rural Greece and the cities of Berlin and Zurich, the Rein monastery and Salzburg’s Mirabell Gardens, the paintings and sculpture of the Renaissance, the writings of Leonardo, Ruskin, and Rilke. The filming sites reveal that Beavers (born in Massachusetts in 1949) has lived primarily in Europe since 1967 – in a constant state of motion.

The overall title that the filmmaker has chosen for the cycle of his works indicates their specific sensuality and impact: My Hand Outstretched to the Winged Distance and Sightless Measure. At first glance, this expression appears like a poetic riddle, but its practical relevance becomes quite obvious for those who see and hear the films. The title speaks to a notion of filmic plasticity and presentness that is the true opposite of all things “3D”. What results from Beavers’ “hand outstretched to the winged distance” is much more immediate than any stereoscopic film ever made; it is always linked to the act of filming itself and to the material reality of what he has filmed. The term “sightless measure”, on the other hand (and among other things), refers to a specific type of montage:

“I start by removing two frames from every shot and attach them to a piece of white paper and write lists. Because I am not usually viewing and reviewing the moving images on an editing table, I have the freedom to create the film in my mind’s eye, using my memory of the actual filming and the rhythm that already exists in it. I build the phrases of images by looking at these pages of small 16mm film frames. It is a process of active memorizing and then making sudden leaps. Searching for how the images communicate with each other is only one part of it. I am also judging the length as much by the physical measure of the film strip as by its duration in time.” In projection, Beavers’ creative method evokes a kind of “cinematic breathing”, as Harry Tomicek has suggested; “an exchange of speech and silence, emergence and concealment. Robert Beavers might be the only filmmaker in the world whose works announce the mystery of this process.”
Until the late 1990s, Beavers worked in relative isolation and rarely presented his films. Two of these shows took place at the Austrian Film Museum where some of his films are being preserved. Since the year 2000 the reception of his work has intensified, especially in the art world, while the opportunities to see it have remained scarce. Recently, larger shows were organized at New York’s Whitney Museum (2005), the Tate Modern in London (2007), and the Pacific Film Archive in Berkeley (2009). The heightened experience offered by these retrospectives is less that of a spectacular ‘cultural event’, but a rare immersion into the beauty and intelligence of craft: the manifold forms (and results) of physical labor which Robert Beavers has filmed since 1967, as well as his own craft which mirrors and extends all the others – and in which practice and meaning can become one.
The films of Robert Beavers will be shown twice during the course of this exhibition: first in six programs  drawn from different time periods, then – on the final weekend – as an intense passage through his oeuvre, with the works shown in the order of origin. For this occasion, the Film Museum has published a brochure on Robert Beavers in German and English. The filmmaker will be present throughout the retrospective.
Related materials
Photos 2010 - Robert Beavers
Books   Robert Beavers. Die ausgestreckte Hand
Share on