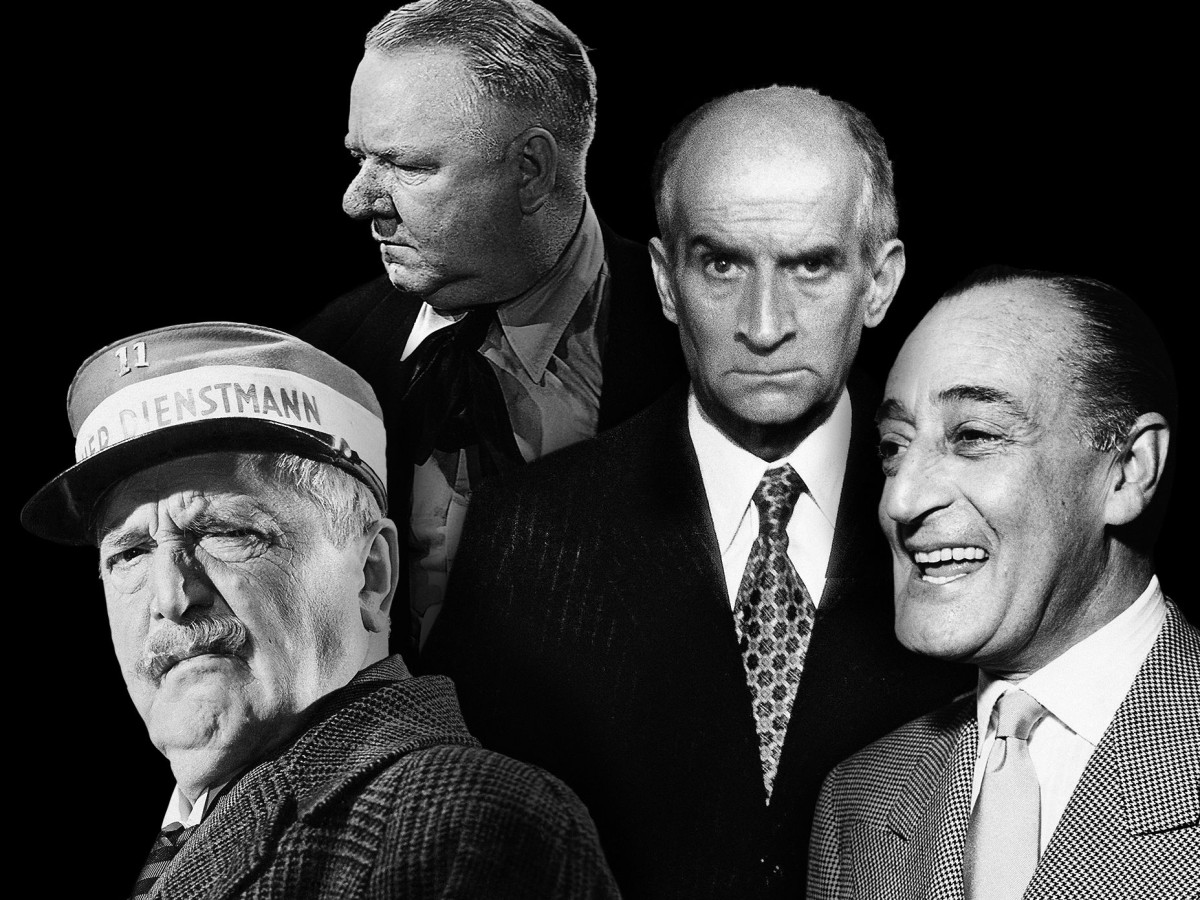 "Those who can't take a joke can’t take any earnest either." – Hans Moser
"Life is too short to make the best of every day."  – Totò

Drawing on four giants of film comedy, the Film Museum presents a special typology of cinematic humor. Austrian Hans Moser, Italian Totò and Frenchman Louis de Funès were not only the best-known comedians of their countries; they were national icons. Although the bulk of their films were neither made nor intended for eternity (and were often received rather indifferently by critics upon their release), their specific attitudes as "performers for the people" and their enduring presence on television made them immortal. They spoke to all layers of society.

All members of the trio share a similar worldview and a similar cultural biography: they all emerged from local stage traditions (Moser was a Viennese Volksschauspieler, Totò performed in Neapolitan avanspettacolo, De Funès’s background was in French farce), which they, following their late breakthrough into film, skillfully tailored to their cinematic purposes. The roles they play are mostly those of tragicomic grumpy old men who give vent to their frustrations over the changes in society. Their old-age anger came from first-hand experience, as in the example of their U.S. precursor W.C. Fields, who had to wait for sound cinema to turn his vaudeville fame into a career in cinema and immediately went on to demonstrate the great grumpiness in its most misanthropic rendition of drunken bliss: "I am free of all prejudices. I hate everyone equally."

This quartet of comedians exposed the mentality of the "little man" in an effort spanning five decades, thanks to a paradoxical mixture of anarchy and conservatism: the anti-systemic humor of figures who see themselves as conformists, or even believe themselves to be the last defenders of an obsolete tradition: the rule of patriarchy. They fight against the powerful, never against power; they undermine the order of things without ever doubting it; and they wangle the basic necessities of life in a struggle against their own poverty rather than poverty itself.

These everyman identification figures mirrored the growing prosperity of the middle class: while Moser favored the roles of subordinates, mostly those of servants or junk peddlers, Totò experienced a social promotion from the subproletariat thanks to the postwar economic miracle. De Funès' leading roles in the 1960s and '70s already belong to a well-off middle class with upper class tendencies; a status W.C. Fields liked to imitate. While Moser plays the servant, De Funès plays at being a gentleman. But his furious outbursts reveal him to be the same pedantic small-minded man as ever.

Even more astonishing are the parallels in the development of the four star personas, despite their different backgrounds. W.C. Fields (William Claude Dukenfield, 1880–1946) loudmouthedly swindled his way up to a U.S. self-made man despite the lack of social mobility – whether as a troubled household tyrant in the 1930s (It's a Gift) or in an utterly surrealist self-parody in the '40s (Never Give a Sucker an Even Break). Hans Moser (Johann Julier, 1880–1964) was a supporting stage actor for a number of years; after Max Reinhardt discovered him in the '30s, he conquered cinema. His early sound film roles such as that in Werner Hochbaum's Vorstadtvarieté show a hugely talented "truthplayer" (Reinhardt) on his way to mastering light-footed comedy, which he then flawlessly executed in playing Anton, der Letzte, a role he was made for. In his Viennese ways, Moser remains the most comfortable of the grumpy old men.

In Totò's case (Antonio de Curtis, 1898–1967), it took several attempts before he had his first success in cinema in the mid-forties. His grumpiness, superimposed on the character of the clown Pulcinella, emphasizes the universal, which accords with the motto of his most personal project, Siamo uomini o caporali? Man or Kapo, survival or exploitation, resistance or adaptation? Ultimately, it comes down to a fundamental question of life or death, as breathtakingly demonstrated in Totò's late work with Pier Paolo Pasolini at the end of the '60s. At the same time, Louis de Funès (Louis Germain David de Funès de Galarza, 1914–1983) experienced his breakthrough – after working as a dubbing actor (for Totò, among others) and playing many supporting roles, e.g. as a black-market butcher in La Traversée de Paris (1956). He brought grumpiness to a climax playing a frenetic choleric in films such as L'Aile ou la cuisse (The Wing or the Thigh, 1976) and delivered a worthy closure to his career in a modern adaptation of L'Avare (1980) – unloved by humanity, the love for money remains the grumpy old man's only consolation.

Each member of the quartet developed their own, unmistakable sound, putting language to the test in irrational ways, warping and transforming it into music: Moser's mumbling singsong, Totò's surreally gliding, ruthless manner of talking things to death, Fields' grunt roaring with insults, De Funès' repetitions, going as far as the absurd shorthand triad ("No!" – "Yes!" – "Oh!"). Their stage instinct led to a virtuoso approach towards cinematic spaces and playgrounds: they could sense the need for close-ups or further interaction, whether with props or colleagues. Totò, De Funès and especially Moser all had their favored film partners, only Fields seemed to consider it unimportant whether he was facing an annoying baby or a friendly glass of martini...

Increasing success allowed them to gain an infamous level of control over their films, not only when it came to individual scenes (via an improvisatory ousting of their "opponents"), but in their entirety, with the assistance of journeymen directors such as Edward F. Cline, E.W. Emo, Steno or Jean Girault. And they often resorted to their famous stage routines: Moser varied his suitcase sketch in a number of films long before Hallo Dienstmann (1952), Totò a colori (1952) is made up of collected great moments of Totò's varieté performances, De Funès adapted his biggest theatrical success in Oscar (1967), and Fields regularly copied his numbers into films. However, the funny facade crumbles as soon as the anger violently breaks out: in the extremely brutal torture Fields inflicts on patients in The Dentist, in the mass murderer game Moser and Theo Lingen play (Es schlägt dreizehn) or in the killer guessing games in Totò diabolicus. In a nutshell of one of Totò's legendary wordplays: "Every end has a patience."
Related materials
Download Recommended readings
Share on